Showing posts from March, 2018
Show All

I finally had the chance to come back... by Diellza 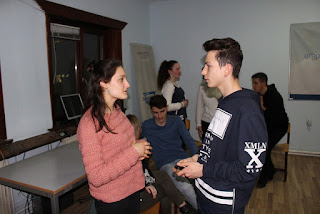 My name is Diellza Muriqi. I come from Peja and I am currently studying at UWC Adriatic in Italy. I joined the YMCA in 2015 when it came to my city and opened the leadership program. Teamwork, breaking stereotypes and prejudices, and critical thinking were among the things I learned throughout my experience at the YMCA, and from that point on, I created an inseparable link to this organisation. I finally had the chance to come back to this place, and along with 4 of my international friends who also study at UWC Adriatic, I led a session about gender equality.  The idea lead a gender equality session came as a result of the current situation in Kosovo and the lack of information about this issue. However, in Gjakova we encountered a different reality. It did not take long to notice that we were dealing with students who respect others’ opinions, have a great sense of critical thinking, and have indeed discussed about gender equality before. Stephanie (Canada) and Leone (Belgium) wer
Post a comment
Read more
More posts