Showing posts from May, 2018
Show All

Know your limits, but never stop trying to exceed them by Drenusha 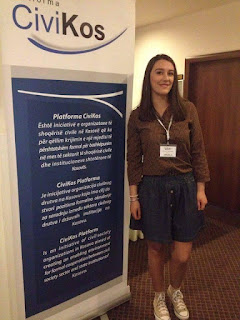 Know your limits, but never stop trying to exceed them My experience at the YMCA in Kosovo Drenusha representing YMCA at CiviKos I have clearly in my mind the first day I came at the YMCA. I was called from my friend just for one day to accompany her, but I did not imagine that I will be a part of it, finding my space to share my opinions, feelings and expand my knowledge. At the beginning I did not know too much for the YMCA. I thought that it was just a youth center that do activities, games and stuff like that. After a month I can say that my point of view changed for better. The way I thought, the way I spoke and the way I communicate with other people. I have learned even more which are the problems that youth face with them. For one year I finished two levels of leadership and took part on world challenge “Move”(cup song), where I met new friends, new leaders and of course two important people Dorina and Adi. They always encourage and inspire us to not giving up no
Post a comment
Read more
More posts